Skip to content
Jennifer A Swallow Being, Life in the People's Republic, Whatever Comes to Mind October 31, 2015December 26, 2019 2 Minutes

Skeletons and carcasses surround us. No, not the spandex, rubber, and cake makeup kinds. Real ones. The dead season is here and while as a city-dweller I was largely insulated from it, I can’t help but pay attention out here.

The flies staked out the entryways the last few weeks, desperate to get into the warmth. They drove my partner crazy and even though I told him they would be gone very soon, he bought some flypaper anyways. He never had the chance to hang it. They are all dead now. 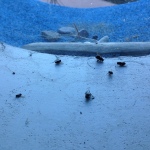 The two aspens that preside over our front steps have been stripped bare. The glory of autumn is very short and limited in the mountains. Our canyon displays a range of golds, but none of the crimson and brick and auburn and merlot of an autumn in the Adirondacks or the Catskills. And now, even the mustard and the saffron and the dandelion are gone.

Perhaps it’s unfair to feel cheated by the monochrome fall. The evergreens that dominate the landscape are, after all, ever green. The peaks of our 14ers rise high, glistening towers of unpolluted white punctuating the cornflower blue sky and brilliant yellow sun that remain unshrouded 300 days each year. We never have to slog through the muddied snow that darkens sidewalks and yards in the northeast from November through April.

Yet the ever-present cold grey rock outcroppings that punctuate our hillside and the colorless dust from the hard earth that permeates our homes and coats our cars and balconies in the summer rob us of the verdant landscape that justifies our friends’ and relatives’ decision to remain in Yankee territory year after year. So, yes, I feel sad when the aspens lose their wings and leave only their eldritch branches casting unwelcoming shadows in the early dusk.

But death here isn’t limited to the change of season. The few flies that dared venture inside during the warmer months became an organic snack for our feline companion. And the 15 by 9 wall of plate glass on the south side of the house has claimed a victim or two. About the latter, I feel somewhat guilty, though logic tells me I shouldn’t. I’ve seen just as many bird carcasses on the forest floor during my walks, far away from the inscrutable deception of spotless glass. But then, the most beautiful magpie has been my loyal companion for the past seven weeks and I fear what will happen to him as this, the most inhospitable of seasons sets in.

on’t kill even the smallest insect that crawls through the cracks in the adobe. They are welcome to roam around, if they leave me alone. If not, I gently sweep them outdoors. There should be no killing for the sake of killing. But as an omnivore, I suffer no delusions as to the origins of my sustenance. Thanksgiving is in sight on the calendar and I have seen a wild turkey or two roaming my hillside.