Skip to content
Jennifer A Swallow Being, Life in the People's Republic, Whatever Comes to Mind February 3, 2016December 26, 2019 1 Minute

Today marks our six month anniversary at The Sanctuary, and Mother Nature has chosen to celebrate by dumping 18 inches of snow on us since Sunday afternoon. After the stereotypically warm and sunny Front Range January, winter is back. The pure gravel road that I walked down on Saturday to meet my friends coming up in their little rental sedan to check out a lot for sale is once again a treacherous stretch of slippery snow that will turn to deadly, mile long ice slick next week as the temperature climbs back into the 50s. I have already seen my life flash before my eyes 11 times this winter as I’ve crept around the switchbacks at two miles an hour. I’m preparing for at least a half dozen more. 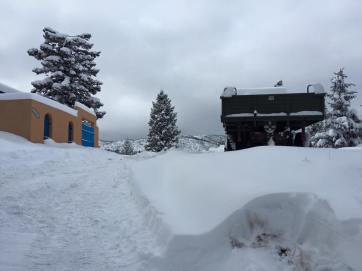 Your car wouldn’t make it up our drive.

It’s ironic that I would choose to live somewhere cold. Growing up in Buffalo, I told my parents they were crazy. What was wrong with them choosing to live in Buffalo when my dad had grown up partially in Florida, where we still had relatives, and other family members lived in North Carolina, Alabama, and Arizona? Later, I spent seven winters in Denver, laughing at the people in mountains just an hour or two away who were trapped inside by blizzard conditions while I sat on patios for happy hour with friends in December. I basked in the sun on walks down the Cherry Creek trail in January. I rode my motorcycle to work in February.

But an 1,800 foot elevation gain makes a lot of difference. I am now in the snow globe.

This move isn’t entirely unprecedented. I did opt to live in Russia for two and a half years (punctuated by several-month-long escapes to Honduras, Mexico, and Spain). But that was different. Russian was foreign. It was exciting and exotic. There was so much to see and learn and do. So many people to meet. It was an adventure, a challenge, a mystery.

And all of those reasons are exactly why I am here too.

One thought on “Six Months in the Mountains: Snowpocalypse”