Skip to content
Jennifer A Swallow My Words, Your Words, Their Words, This is English, Thoughts on English, Uncategorized, Writing October 10, 2016December 26, 2019 2 Minutes

I’m way ahead of the curve in my understanding of some language rules. I took a trip down memory lane last month when this incredibly complex language rule no one knows! became a national obsession for a few days. But I knew it! I was teaching it to my English language learners in Russia 14 years ago thanks to the boring and overly formal Headway textbook series. If only I had thought to write about it on my blog, I could have had my 15 minutes of internet fame.

But some language rules I’ve gone my whole life without knowing about. And I feel a little embarrassed that I’ve only just figured this one out after 15 plus years of calling myself an English language professional. I’ve never known when to keep the silent e when converting words like knowledge to knowledgeable and when to drop it, as in judge to judgment. It turns out the rule is surprisingly simple. Keep the e when dropping it could cause confusion in pronunciation. If we wrote knowledgable, for someone who didn’t know English well, the a right after the g would make the pronunciation now-led-ga-bul entirely plausible. For the most part, this issue exists in words that end in -ce and -ge. Since judgment lacks a vowel after the g, the idea that we might say jud-guh-ment seems ridiculous.

G really is a pesky letter. It caused more confusion for me last month when a company I’m collaborating with on a freelance project changed its name to Sagence. In my head, the pronunciation was suh-GENCE but it turns out the name is actually SAY-jence, which makes a lot more sense given that the company is in the education business and would have the name sound more like sage than the nonsensical version I came up with. But I often see business names whose pronunciation is not intuitive and wonder if the companies bothered to test them out with focus groups. It can’t be good for branding to have a large portion of the population saying your name incorrectly.

But maybe my brain is just muddled. I know that INsurance and inSURance are equally acceptable pronunciations. As are AFfluent and afFLUent, even though the latter makes me cringe. And I know that for some odd reason, we say maRINE but MAriner. But it never occurred to me that conTEMplative has the stress on the second syllable instead of on the first. Aren’t well-read native English speakers just supposed to know these things? Not really, it seems. I don’t feel so bad about this one.

How a word is drawn in comparison to others around it also influences emphasis. I stayed in an AirBnB rental last month that had this artwork on the dresser in the bedroom. The sentiment is lovely, but given that the comparison is between having and making the best of everything, it irked me to no end that have wasn’t given a graphical treatment equal to that of make. Or at least have been made to stand out in some way. 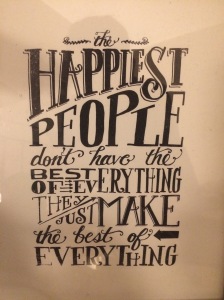 And finally, it’s your turn to weigh in. At my Write the Docs meetup last month, we had a lively debate going about whether to use sentence case or title case in blog titles, chapter titles, headings, etc. I am firmly in the title case camp because I think it increases readability. If you aren’t sure what the difference is, check out this nifty capitalization tool. What’s your opinion? Feel free to share in the comments or take the poll on the Knowledge Owl website.