Skip to content
Jennifer A Swallow Life in the People's Republic, Moving, Whatever Comes to Mind January 25, 2017December 26, 2019 3 Minutes

A big cat family roams Alaska Hill. Their presence has been been confirmed. At first, the evidence was inconclusive: sounds of an animal splashing around in the creek at the bottom of the hill and a barely visible tail near the sound of a branch snapping in the dark. Perhaps a murderous mountain lion, but perhaps a charming bobcat. Then, a cache was discovered near a neighbor’s propane tank. And then a spate of sightings around the area of the cache: the momma coming up a driveway, the cub disappearing into the woods, the duo crossing the road.

I have an unjustified feeling of certainty that I will be the feline’s victim. Much the way people panic when they see a gun, I’m certain, now that several people on my street have seen the beast (and its offspring), that it’s going to eat me, my dog, or both of us. Guns are all around; we simply aren’t aware of them because the owners have concealed carry permits, emphasis on concealed. The mountain lion has always been around but its territory is enormous and it’s mainly active at night. Logic often goes out the window when confronted visually with something you don’t like. I’ve hiked these woods many times with only my trusty but useless dog for protection. Now, suddenly, the caves and pits pockmarking the land terrify me, although my rational brain knows nothing has actually changed. 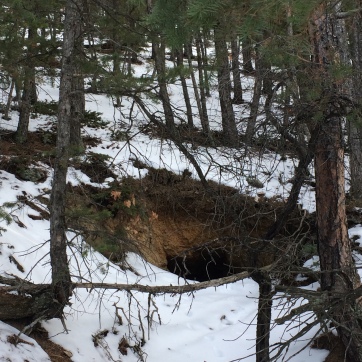 When I talk to people about what it is like to live where bears and mountain lions are omnipresent, the most common remark I hear is that “You are in their territory.” I’ve never understood this statement. Are human beings not as much a part of the natural world? Are we some sort of artificial life transplanted from another galaxy? Is there some unwritten, biological law that people are required to live in areas with a certain population density? Are the nomads of Mongolia or the remote tribes of the Amazon violating some mandatory geographical division of species? Why do people insist that anything beyond the boundaries of the Olive Gardens and Kmarts of the exurban strip malls “belongs” to wild animals?

The land belongs to all of us. As the more intelligent species—the one capable of rationalizing and critical thinking and compassion—we have a moral duty to take whatever measures we can to coexist peacefully with the lesser creatures and not provide enticements that their instincts cannot resist, thereby knowingly putting them in direct conflict with us. But this doesn’t mean we need to place their needs before ours. I wouldn’t sit a toddler down to play with butcher knives and I wouldn’t attempt to raise goats at my mountain home or store my garbage outside (like this despicable member of our species), tempting the mountain lions and bears to seek out an easy meal close to my house. However, if I were attacked by another human in an alleyway in Chicago, I would do everything in my power to fight back and protect myself, and I don’t think anyone would dispute that I should. And if I am attacked by a wild creature here, I will fight to the death without a moment’s hesitation with whatever man-made weapon human ingenuity has empowered me with. I’m not sure why certain people out there want to make me feel that I don’t have a right to do so.

Survival of the fittest is not a competition I ever want waged on the hill, but I won’t stay inside and live in fear. I have as much a right to prowl these woods as the fur-covered creatures do. I never want to encounter the momma lion and her cub while I’m walking in the woods because a face-to-face encounter can’t lead to a positive outcome. But mountain lions don’t think twice about using their stealth and superior might and enormous teeth against the mule deer or coyote. Neither should a human feel irresolute or guilty about using the abilities that nature has endowed us with for self-preservation, even though we should always hope it never becomes necessary.