Skip to content
Jennifer A Swallow Moving, My Words, Your Words, Their Words, Peak Performance, This is English, Thoughts on English, United States and Canada, Whatever Comes to Mind August 5, 2017December 26, 2019 2 Minutes

On our way into mountains last Sunday to hike Grays and Torreys peaks, my two girlfriends and I saw a sign on I-70 just like this one. 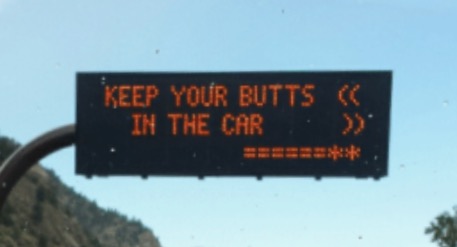 All three of us had the same thought – we need to bring the car from 75 mph to a complete stop in the middle of the highway and get out of the car right now to see what we are missing! Surely if CDOT felt the need to tell us (in such a cheeky way) that we should remain in the vehicle, something important and exciting must be happening along the roadside. And then 20 seconds later, we non-smokers realized we had all misunderstood which “butt” the sign meant.

So, we didn’t slam on the brakes and cause a massive accident and subsequent traffic jam, but later in the day someone did. After we summited the mountains and made our way back down to the car, we turned eastbound onto the highway only to find that we could summit the peaks again faster than we were going to get home. Someone had jumped the median and gone the wrong way down the highway, pinballing into vehicles, and traffic was backed up for more than 30 miles. Rather than sit idly, we decided to take the frontage road to Idaho Springs for some well-earned carbohydrates at Beau Jo’s Colorado Style Pizza. And with Colorado pizza goes Colorado beer, as well as many, many glasses of water to combat our dehydration from the hike.

Two and a half hours later, satiated and ready for bed, we decided to give the road another try. We cruised along for 15 miles or so at a somewhat decent clip, only to be derailed again by what, six hours after the first accident had been reported, must have been a second one. We all desperately wanted to get home at that point. We had woken up at 3:45 am in order to be at the trailhead by six and heading down from the second summit well before the rain clouds were supposed to roll in around noon. We were battered. Our feet had blisters, our lower backs creaked, our knees and hip joints ached, and every muscle in our legs was cramping up. The glory of the morning’s accomplishment had faded, temporarily, from memory, and vast impatience had taken its place.

To the iPhones! We searched for an alternate route, got off the highway, and went through some back roads until we reached the inevitable bottleneck that hundreds of other similar-minded motorists had caused on the inadequate rural roads. At this point, we resigned ourselves to our fate, but our bladders, full of DogFish Head SeaQuench Ale, New Belgium Tartastic, and several liters of water, hadn’t been properly prepared for the extra 40 minutes Siri now forecast for our drive home. Since traffic wasn’t moving and we were in a heavily wooded area, what do you think we did? Got our butts out of the car, of course!

3 thoughts on “But Is That Butts or Butts?”