I am not a fan of the “they do it in Europe” argument. I frequently hear people say this regarding free higher education and universal healthcare, among other issues. When pressed for implementation details, these people tend to be clueless about the bureaucratic, and, just as importantly, the cultural factors at play. I could go into detail, but my aim here is not write a political post. Instead I’m going to contradict myself briefly and become one of those people I generally scoff at by describing some charming, impressive, and useful customs that I noticed in Italy that I think we should adopt in the United States.

I’ll start with the simple. Many shops place umbrella stands outside their doors when it rains. This is nice from the perspective of both the store and the consumer. The shop doesn’t have to worry about goods getting wet and ruined. Consumers don’t have to carry around a dripping umbrella. And it seems that no one is worried about their umbrella getting swiped by a passerby who has been caught in the storm empty handed. I’m sure it happens sometimes, but if it were really a problem, I don’t think those bins would be out everywhere.

Next, food and drink. You’ve likely heard of tapas in Spain, a small snack included with the price of your wine. I didn’t realize this is an Italian custom as well. Not everywhere, but in more than half of the places I ordered a cocktail, I was served a snack as well. The snack ranged from a small bowl of potato chips to an assortment of tasty bruschetta.

What’s more surprising about this to me, is that the offering of tapas didn’t seem to be dependent on the price of the drinks. I was equally likely to be offered something to nosh on when I ordered a 3 Euro glass of wine as an 8 Euro one. I’ve only been served tapas once in Denver, and that was at a place where the drinks were in the $15-$20 each range. Of course, we did get the fanciest tapas with our 30 Euro glasses of champagne at a swanky rooftop bar in Venice. 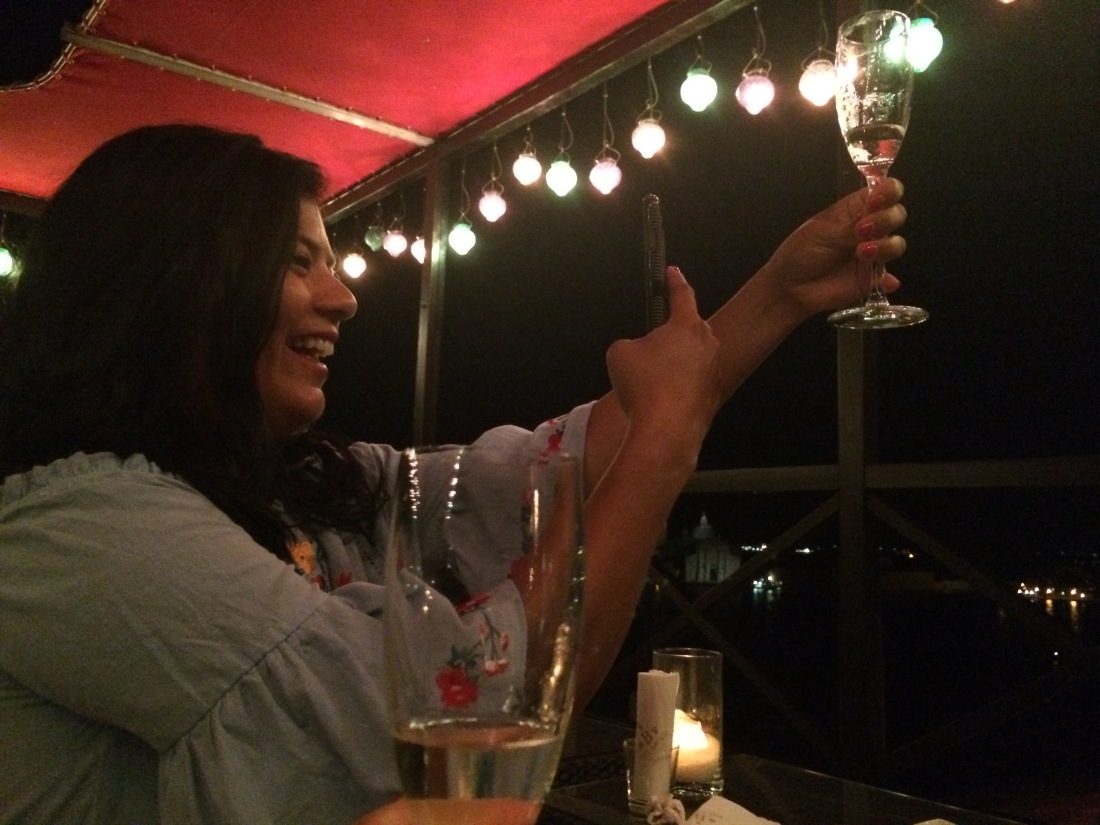 Along the same line as tapas is the biscotti or chocolate served with coffee. That little nibble of something sweet is such a pleasant accompaniment to a bitter espresso. It’s nice to not have to buy a $3 cookie to fill that need for sweet. And again, this was independent of the price of the coffee. In most places, the average price of an espresso was 1.5 Euros. I love this! The Italians seem to regard wine and coffee as a way of life, not as lifestyle products.

And then there’s water. When someone told me the water from all fountains around towns is drinkable, I didn’t believe it. I would never hold my refillable bottle under an ornamental fountain in the United States. But I saw other people doing it in Italy (and Switzerland), so tentatively joined in, fully expecting to be spending the whole evening in the bathroom as a result. Turns out, the water really is potable! This is wonderful. Decorative and functional.

Aside from food, there are two traffic habits I would like to see adopted here. The first is actually a (completely ignored and unenforced) law in Colorado, one of the worst states for driving. Don’t linger in the left lane. The left lane is for passing! The Italians strictly adhered to this on the highways and how pleasant that was. Traffic moves more efficiently when you don’t have ordinary citizens passive-aggressively pretending it’s their job to play speed cop.

The other is the use of hazard lights (or four-ways or emergency lights – pick your preferred term). When the speed of traffic on the A4 was rapidly changing from 140kph to 60kph during rush hour, everyone put their hazards on to warn those behind them that they really need to pay attention and hit the brakes. People in the United States, or Boulder at least, seem to not even know their cars come equipped with hazard lights. People here stop randomly on the street all the time and just sit there, holding up all traffic because no one knows what they are doing and whether it’s safe to pass because they didn’t put their hazards on. And, conversely, I’ve had my hazards on before while I was waiting on the street to pick someone up and had people pull up behind me and just sit there waiting for me (because people in Boulder don’t honk), even though they had ample room to pass.

But not every custom I saw was as worthy of co-opting as the ones I’ve discussed above. There were a few that I think should be left in Italy, and probably banished from there too!

In the Dolomites, these little garbage pails were set on the table at breakfast. I love European breakfasts but they do generate a lot of garbage. The breakfast table is laden with individual serving packets of jams, nutella, butter, and soft cheese. So, I suppose these little pails make sense and aren’t worth complaining about. Maybe it is nicer to have all the little empty packets in the bucket instead of on your own plate, as we do in America, but it irked me for some inexplicable reason.

In Venice, there was a cover charge for sitting at a table in a restaurant. So, you pay to eat, but you also pay a little extra (a Euro or two) if you want to sit down. This was especially prevalent in coffee shops, where most people drink their espresso while standing at the bar and then get on with their day. They aren’t there to linger for three hours with a laptop, and if you do, then you pay for use of the table. This makes some sense to me. But in full-service restaurants where you are buying a 30 Euro meal, this makes no sense. (We also tried having drinks at one restaurant and were told that was not allowed. We had to buy food, even though it was 2 in the afternoon and there were at least 15 open tables.) But…on the plus side of the cover charge, there is no pressure in Italy to vacate a table when you are finished. You can linger, and people do, for as long as you want without ordering more.

Another odd restaurant habit is that although public water fountains are abundant, water in restaurants is not. Tap water is not given out most places; you must pay for bottled water. I live in Colorado where the altitude makes drinking lots of water important, and therefore, at any restaurant or bar you go to almost immediately someone brings you a glass of water. It’s rare to have to ask for it. So, I tried to keep my own cultural quirks in mind when thinking about this. Yet, while I can understand the offering of tap water not being automatic, I can’t understand why, in many places, they simply refuse to provide it. I have to think about this one more. Does this encourage a healthy mindset of regarding water as a precious resource? Maybe, but that is incongruent with the availability of public water fountains, most of which I should point out, run incessantly; they don’t have a handle to turn on and off.

And finally, the big one: smoking. I cannot understand how in 2017, with everything we know about the indisputable dangers of smoking, so many people from a developed country still smoke. It is fucking disgusting but everyone does it. All these gorgeous, stylish Italian people walking around smelling disgusting and giving themselves yellow nails and teeth, and premature wrinkles. Why? Nothing ruins the quintessential Italian sidewalk cafe experience more than having someone’s secondhand smoke wafting over your food. I’m not even going to be accepting or open-minded or tolerant about this issue. All I have to say about this is, what is wrong with you people? I went into only one restaurant my entire trip that had a separate smoking section. But at least in the places I went, they keep the streets and sidewalks free of butts. So there’s that.