At Blackwater Pond the tossed waters have settled
after a night of rain.
I dip my cupped hands. I drink
a long time. It tastes
like stone, leaves, fire. It falls cold
into my body, waking the bones. I hear them
deep inside me, whispering
oh what is that beautiful thing
that just happened?
– At Blackwater Pond, Mary Oliver

Mary Oliver’s last two lines can perfectly express the entirety of my feelings about the weekend I just spent in the Flat Tops Wilderness, but she can’t describe the place to you if weren’t there. Here is my attempt.

Leave I-70 and the pollution and chaos and noise of the civilized world behind and marvel at the yak. A magnificent woolly yak roams ranch land on route 9 northbound to Kremmling. Stop and stare. Then continue the easy, traffic-free drive to the charming dirt roads and wooden structures of Yampa and beyond. Enter the national forest land and and take in the valley that opens up in front of you, stretching for miles, with the Bear River rushing from reservoir to reservoir, beckoning fly fishers and fueling a verdant landscape that is bordered not by the jagged peaks you would find to the south, but by blunt, rocky protrusions from which the area derives its name. Greet the groundhog, standing upright on the side of the road, inviting you to follow him into his wild kingdom.

Do it. Free your mental state from the confines of the long drive by hiking to Smith Lake. Any path that begins its ascent by immediately disappearing into tall grass and wildflowers must be taken. Enjoy the unruly trail with its rocks and roots and overgrown foliage. Realize that this condition indicates a lack of tourism. Relish the blissfulness of solitude in the type of forest that can make the most strident skeptic believe in fairies and elves. The fallen, skeletal trees litter the soft forest floor, far outnumbering the upright live ones. Admire how the fallen death-gray sentries provide a base for new life, green stems and leaves shooting out from the cracks and knots, small forest creatures hiding in the crevices. They do the same on the transparent waters of the nameless tiny kettle lakes dotting the landscape on the climb to the trail’s namesake. Resist the urge to walk out on one because no matter how precariously you balance, you will fall, splashing and disturbing the calm. When you reach Smith Lake, follow its circumference counterclockwise, until two-thirds of the way around, the trail ends. Blaze your own. Take on the adventure of sloshing through the swampy areas and leaping over tree trunks so large your legs and arms barely reach halfway around them as you give in to the temptation to hug them. If you’ve never seen the ground so dense with flora, respect that your feet might be treading where no human ever has before. Fall in love with that idea. Emerge from the trail in silence, with a companion whose soul craves such natural beauty as much as yours does, making words unnecessary to mutually appreciating the experience.

Claim a walk-up tent site in Bear Lake Campground but don’t pitch your tent on the cleared pad. Set it up further into the woods among the pines and aspens, on the edge of the ravine so you can hear the Bear River raging below you all night long. Don’t head right into your tent to sleep. Bring your blankets outside so you can gaze up through an evergreen-ringed portal at the infinite sea of stars whose occupants fade in and out of visibility as the thick clouds stream by. When the deep chill of the still night sets in, move into your tent and dream until sharp thunderclaps startle you into consciousness so you can see brilliant lightning illuminating the dark forest. Let the ensuing patter of raindrops lull you back to sleep.

Feel gratitude in the morning when the rainstorm gives way to partial sun so you can safely take on the challenge you came for. Check your snacks and water supply, ensuring there is enough for both you and your loyal canine companion, and then take that first, buoyant step onto trail 1119. No official markers exist for your destination, the deadliest stretch of the Chinese Wall, and it’s not on the maps, but everyone knows it’s what drew you here, and previous hikers have amended the weather-beaten signage to include that most vital piece of information. That assistance is especially valuable since, despite your late mid-morning launch, you encounter only one other couple throughout the next two hours.

Your calves and glutes start to burn as the trail steepens where the sides of the cirque meet the arete. Pause frequently, heart pounding against your chest cavity, though you’re still less than 11,000 ft high. The grade will soon increase more. The trail winds up the sides of the arete, and as you stand exposed on the rocky face, a massive thunderclap rattles your being. Safety is above you, so despite your exhaustion, push on, faster, to a welcoming grove of miniature pine trees. Shelter in the most perfect natural tree fort and wait for the swiftly moving clouds to make their way through the atmosphere. When the rumblings are finally in your right ear instead of your left and growing ever more distant, venture out to inspect the sky. The clouds float on for miles to the west but are a soft, friendly, and pale gray, rather than a menacing slate color. Onward and upward.

Push your body another 1,000 feet above the beautiful campground of the night before until you stand on the table top and the objective comes into view. A few hundred feet ahead, the arete narrows to a width of three feet. The groomed path vanishes, forcing you to climb over boulders that may come dislodged at any moment and carry you with them thousands of feet straight down. Approach it, as Atreyu to the Sphinxes’s Gate, the danger below rather than above. Swallow your fear. Exert your moxie. Don’t turn back. That’s not who you are. Take the first step. And another. And another. Make the mistake of looking down into the vast nothingness one foot to your right. Feel your head swim and your legs begin to shake. Terror comes rushing in. Go, now, before the darts shoot out of the eyes of sphinxes. Grab your dog’s harness more tightly because you are an inseparable team, urge him forward, and go, go, go!

Seconds later, victory. Elation. Wonder. A high you can only get from physical accomplishment that has taken you to the top of the world.

Run down. Run because you have to. Because you’re not a bird, but you want to be so badly in this moment and whirling down the side of a mountain at breakneck speed is the closest you can come to the sensation of taking flight. Run the entire way back to the trail head, pausing only to let a group of four people and four decorated llamas pass by. Smile broadly because, yes, you really did just see four llamas out for a stroll through a Colorado forest. Arrive where you started hours before, and reap your rewards at a picnic table in the sun overlooking the valley that has captured your heart and given you the gift of a perfect summer weekend. 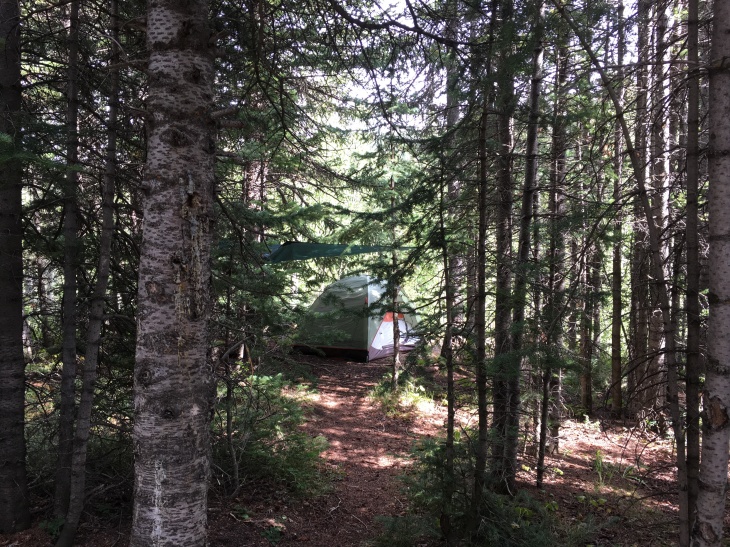 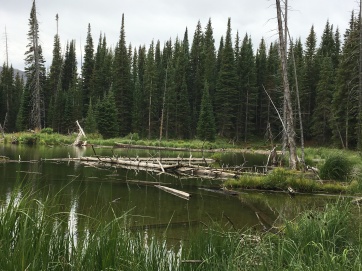 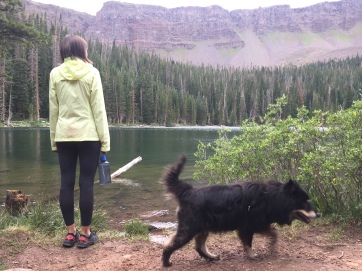 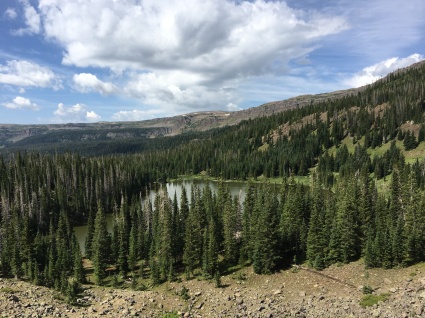 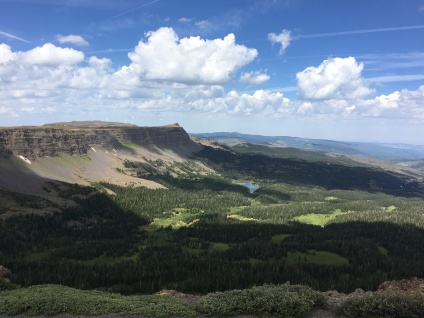 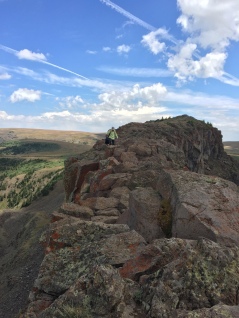 One thought on “When in the Flat Tops Wilderness”