Skip to content
Jennifer A Swallow My Words, Your Words, Their Words, This is English, Thoughts on English, Writing September 12, 2018December 26, 2019 4 Minutes

No, this post is not an ode to that old Extreme song, although it’s still a great one! The post is a little bit about “code switching,” I started hearing about everywhere a few years ago. Code switching refers to the verbal portion of the many personas we all have. The words we choose, the way we say them, the tone of voice, affected accents, and sometimes even the language itself. It was weird to me that suddenly code switching was a phenomena because it’s something I’ve recognized myself doing, often consciously, forever. More on that later in a minute. But this post is also about much more than code switching. It’s about all sorts of language choices and language differences that help us relate in specific ways to the world around us and reveal a lot about us.

Haven’t we all been adapting our speech since we were children? I know I have. I spoke one way at home with my family and one way at home with my friends. I spoke another way with my teachers and even another with people at church. Later, I had various sets of speaking mannerisms for work relationships: waitress talk, teacher talk, tour guide talk, boss talk. In my “performance” jobs (teacher, tour guide) my code switch was so strong that I felt quite self-conscious of people who knew other the other versions of myself hearing me in that role. While the degree to which I code switch now is less—for example, I’m now an adult who lives on her own, so I don’t feel I need to bend to my parents’ rules of acceptable speech nearly as much any more when I’m around them—I’m more conscious of it when I do engage in it. For example, sometimes I realize my speech is too casual with my manager orI feel like I’m crossing some line, so I’ll stop using certain words and will hold back expressing certain ideas.

Choice of language can help relay a specific message. A few weeks ago, I was in a fast casual restaurant for lunch and close to me was a Hispanic lady with a small child. They were speaking in Spanish when the child started acting up, raising her voice to an inappropriate level for the setting. To discipline her child, the woman switched to English. I thought that this was a clever choice, because it let everyone around her understand that she was doing her best to be a good parent and wasn’t simply letting the child cause a disruption. I also thought it was somewhat of a sad commentary on the state of human relations in our country that she felt the need to switch languages, presumably to escape judgment. 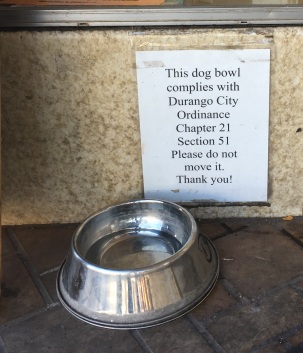 This sign outside a Durango coffee shop immediately caught my eye because of the underlying story it implies. Dog bowls are a common sight all around Colorado. It’s hot and dry here, and people really love their dogs. Who would see a bowl of water as anything other than a nice, welcoming gesture? Some crotchety old coot in Durango, apparently. Not every shop with a dog bowl out posted such a sign, so would there be a reason to post this sign if the shop weren’t having problems with someone complaining about the bowl? I believe there’s a lot of unpleasant, meddlesome history behind this little sign.

When my plural is your singular. I know a highly accomplished triathlete who also happens to be missing one leg. He has participated in numerous world championships, but unless he’s training for a specific race, he doesn’t run much. It’s not the most comfortable activity with a prosthesis. However, he started going on some short runs with me, just to get himself back into it. The day after the first time we ran together, he texted to say his “calf” hurt. Thrown off by the singular “calf,” I asked what he did to it, and of course, felt a little foolish when he said it was the run. At least I didn’t ask which calf. Because he’s more fit and active than most people with two legs, the lack of a leg isn’t something I ever thought about much. It had no effect on our ability to do things together, so my brain simply couldn’t connect the dots of his text. But it did strike me afterward how different it must be to never once in your life utter the words “my feet,” “my ankles,” or “my calves” because you only have one of each. There’s a whole lifetime of unique experience wrapped up that single text.

Really, people? I know what you’re doing here. Adapting language to influence people is common, especially in surveys. People don’t even attempt to be neutral half the time because they have an agenda and want people to take their side. For example, my company recently implemented a new collaboration software across the engineering department. Everyone in our department loves it and dozens of people in other departments are clamoring for access. Yet, IT doesn’t want to support it. So they sent out a survey asking how we use the tools currently available and included this new tool on the list. However, the survey was multiple choice, not free response. And the choices available completely omitted the intended uses for the new tool. So, since none of the options were applicable to this tool, it appeared to not be used at all, when in fact, it’s the second most popular collaboration tool in the Engineering department.

Oh, come on. Now this is just plain offensive. I also came across this gem recently.

Ignoring the poor grammar, let me make clear that answering questions about race, gender, veteran status, and disability is always optional. When you see these questions, you have a series of options to choose from and then something along the lines of “I decline to self-identify.” Never in my life have I seen an opt-out option so manipulatively written as this one. I think this phrasing says a lot about the company culture. I certainly wouldn’t want to work where people try to make you feel bad about not wanting to reveal personal and protected information. I never answer these questions because I feel that continuing to force people into categories and analyzing everything we do from within this framework is detrimental to breaking down racial barriers. But I’m sure the people at this company are not interested in that point of view.