Last weekend, Trotsky and I took our first ever solo camping trip. In almost nine years, it’s never been just the two of us. Between trips with partners, casual lovers, friends who live locally, and friends who are far away, finding time to go places on your own is difficult. But last weekend, it happened. Not at first. At first there were several different plans. Meeting some people Saturday, meeting other people Sunday, having a camping companion…but eventually all the plans crumbled and it was just me and the beast. And how wonderful it was! Of course I love travelling with other people, sharing the moments of awe and excitement, experiencing the thrill of getting intimate in an exotic or wild location, and building common memories and bonds, but travelling alone is special in its own way.

The benefits of solo travel are obvious – you can do anything you want without worrying about what someone else wants to see, whether someone else is hungry, if someone else needs to get back home at a certain time, other people’s moods, and other people’s agendas for the trip. It’s all about you. You can also take as much time as you need to process everything you see, you can stop at every Point of Interest sign, you can turn down every random road, you can think a lot instead of feeling compelled to fill dead space with speech, you can write all your thoughts down at the moment they occur to you without making anyone feel alienated, you can listen to whatever podcast or music you want without compromise, you don’t have to be self-conscious about what your armpits and other body parts smell like after a long hot hike with no shower at the end of the day, and you can curse out other drivers and get frustrated or hangry without making anyone else feel uncomfortable and without incurring judgement. Despite these benefits, I haven’t traveled alone since a two-and-a-half week trip to Nicaragua in 2008. And before that, it was 2000 in northern Australia and Hong Kong. This trip was only 32 hours in the Colorado mountains, but larger solo trips are forthcoming, so maybe this was good practice. Here’s what dog and I saw.

This was the only hike on my list of potential hikes for the weekend that I stuck with. It’s a nice, fairly easy trail in east Vail that still has a good elevation change. The drive out was beautiful – I haven’t gone over Vail pass in the autumn in two years and this was the perfect time of year to be there, right at the peak of the leaves changing color. The trail itself was pleasant and easy, and terminated in a rock perch with a terrifying drop down to the waterfall. 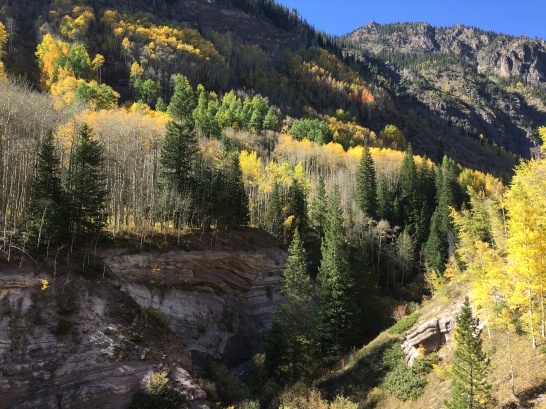 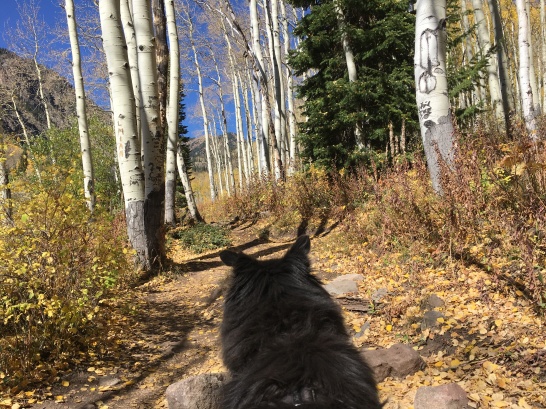 Last year I made a list of ghost towns in Colorado that I wanted to check out. Gilman was on the list but since dropped out of my mind until I was cruising along a mountainside south of Minturn, came around a corner, and saw it there, bathed in the deep golden light of the evening sun. It looked so lovely; it was easy to forget that it’s a Superfund site. Despite the abundance of No Trespassing signs, I would have hiked down to check it out had I not been alone. I’m more afraid of drifters and ne’er-do-wells than of pollutants, ghosts, collapsing roofs, or security guards. 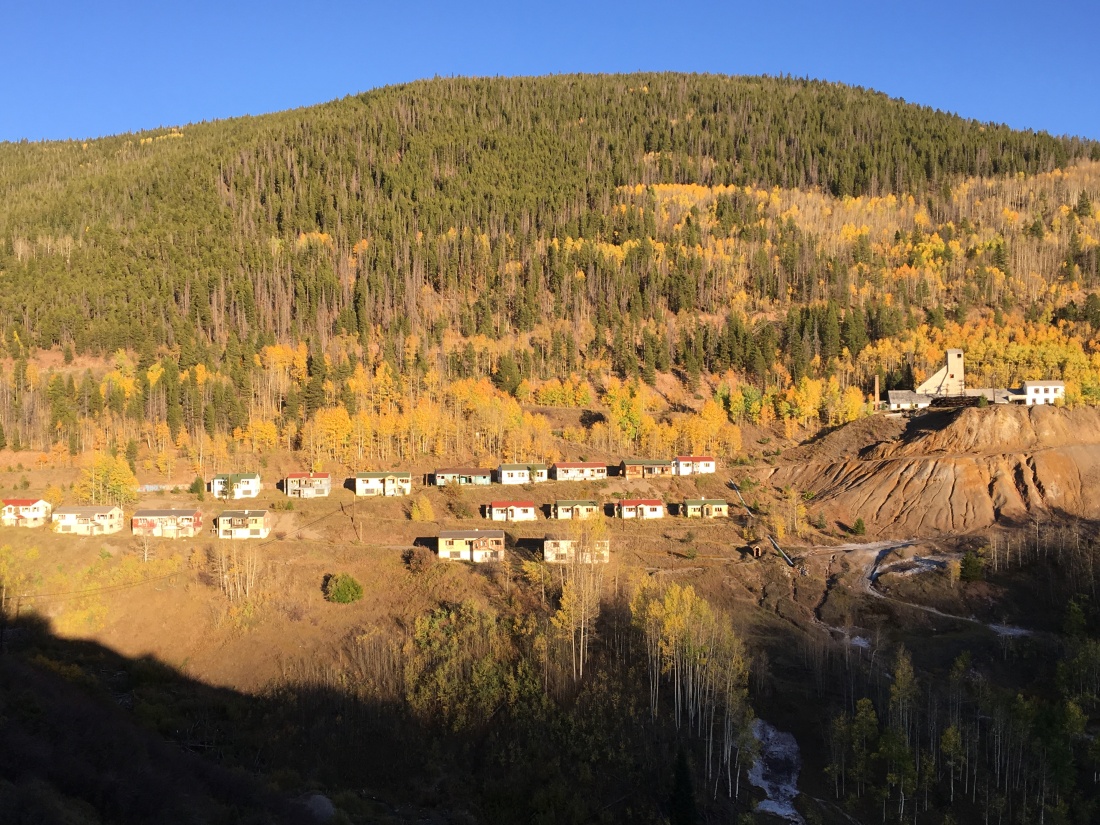 After seeing a sign about unexploded weapons outside Red Cliff (a hardscrabble mountain town if ever there was, and not in a #vanlife kind of way) I stopped and asked some hunters what it was about. They told me there were remnants from Camp Hale training in the surrounding forest, and that the camp was right down the road and had old buildings to explore. So, I had to check it out. Camp Hale was built specifically for military training in winter and mountainous conditions, and Tibetan freedom fighters trained there. When I came across a sign that said 400 people who trained there later died in the Italian Alps, I had one of those “Whoa, my life just came full circle moments.” The Italian Alps…exactly where I was backpacking last August. Although the sites I visited were from WWI and the soldiers who trained at Camp Hale fought there in WWII, I still found the coincidence interesting. 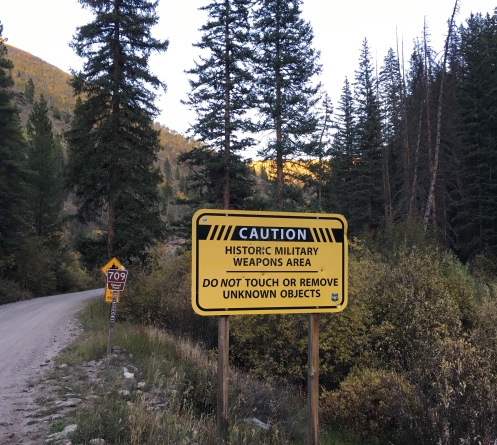 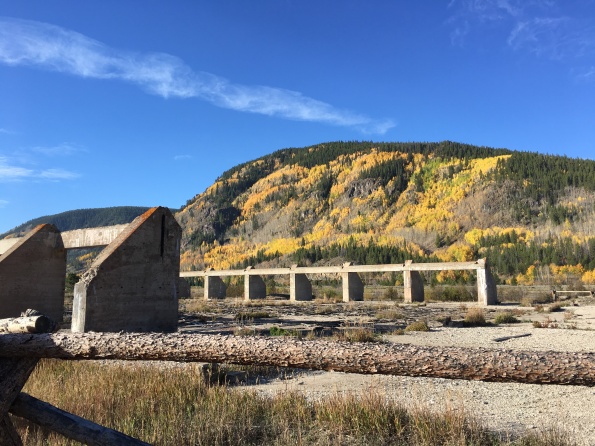 This is an unremarkable campsite right off a 45 mph hour road, which hardly allows for a magical, sylvan experience. However, I’m a bit afraid of backcountry camping, especially this time of year when the bears are especially aggressive about their last bit of fattening up for hibernation. I like forest service campgrounds that have other people around. And toilets. And it turned out to be lovely after all. As I sat sipping wine next to my little fire, I realized the mountain face on the opposite side of the canyon was well illuminated. And although the sky had briefly gotten dark around 8pm and some stars were twinkling overhead, it was now getting turning a lovely shade of violet, rather than black. I looked around the campsite, wondering who was shining floodlights all over our little community. No one was. It was the reflection of the sun off the nearly full moon rising over the canyon wall on my side. I turned to the east and watched a most spectacular moonrise.

Later in the night, Trotsky and I discovered that we were in for our first sub-freezing temperatures camping experience. One of the many things I like about camping is being out in much colder temperatures than I would allow my bedroom to be. It toughens you up and makes you adaptable. But we were really, really, really cold. Even Trotsky slept under a blanket and huddled against me for warmth all night. I can’t say for sure how low the temperature got, but the water in Trotsky’s bowl was frozen solid in the morning, our rainfly was covered in frost, and when we left the campground at 8:30 am, my car registered 32 degrees, so it was likely much colder than that in the middle of the night. 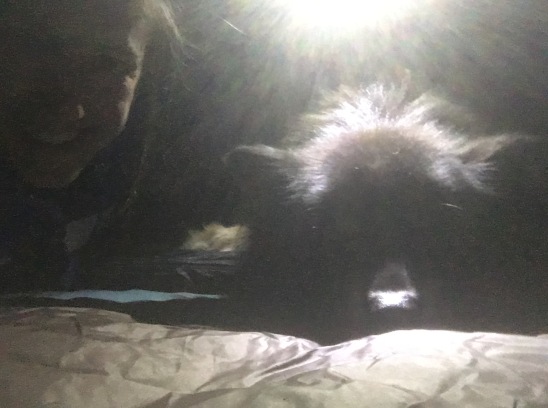 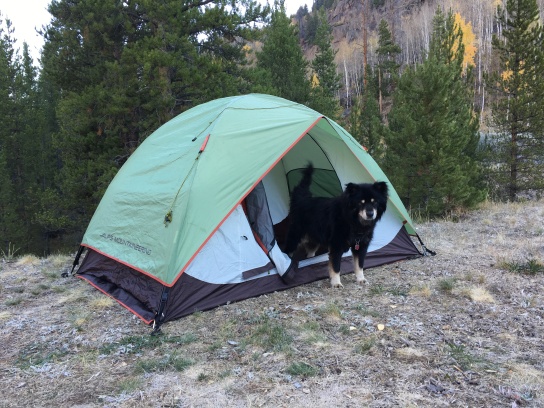 The sign said National Forest Access Road 703 and though we didn’t know what was down the road or how far it went, we decided to find out. There were lakes, trails, a reservoir, sunshine, and almost total isolation. The temperature was perfect for exploring, at least 45 degrees warmer than it had been overnight. The landscape was beautiful and made Trotsky and I wonder if we could overcome our fear of wild beasts and become backcountry campers for a week or two next summer. Nope, still don’t think so, but it’s fun to imagine. 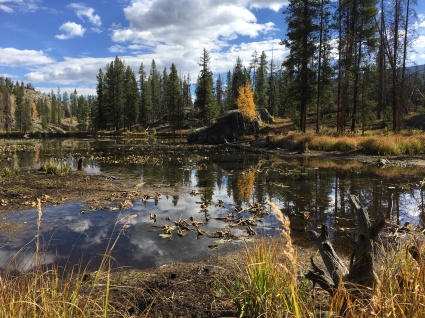 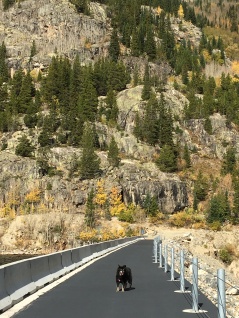 Rather than driving back up through Minturn to I-70 and then eastbound, we took the back route to Vail Pass. Shrine Pass is a great drive, full of abandoned cabins, well-maintained overlook deck where you can lie out and catch some fun, hikes, and off-road trails. Trotsky and I and our battered SUV made it quite far up a remote turn off until we reached a section that was extremely narrow and had about a 50% grade. My car isn’t built for that intensity, and I didn’t know what laid beyond. I didn’t want to get into a spot where I wouldn’t be able to turn around if needed, so we had to head back to the main road. We topped off the trip with a hike up to and a ways along Shrine Ridge, a lightly trafficked route with incredible views. 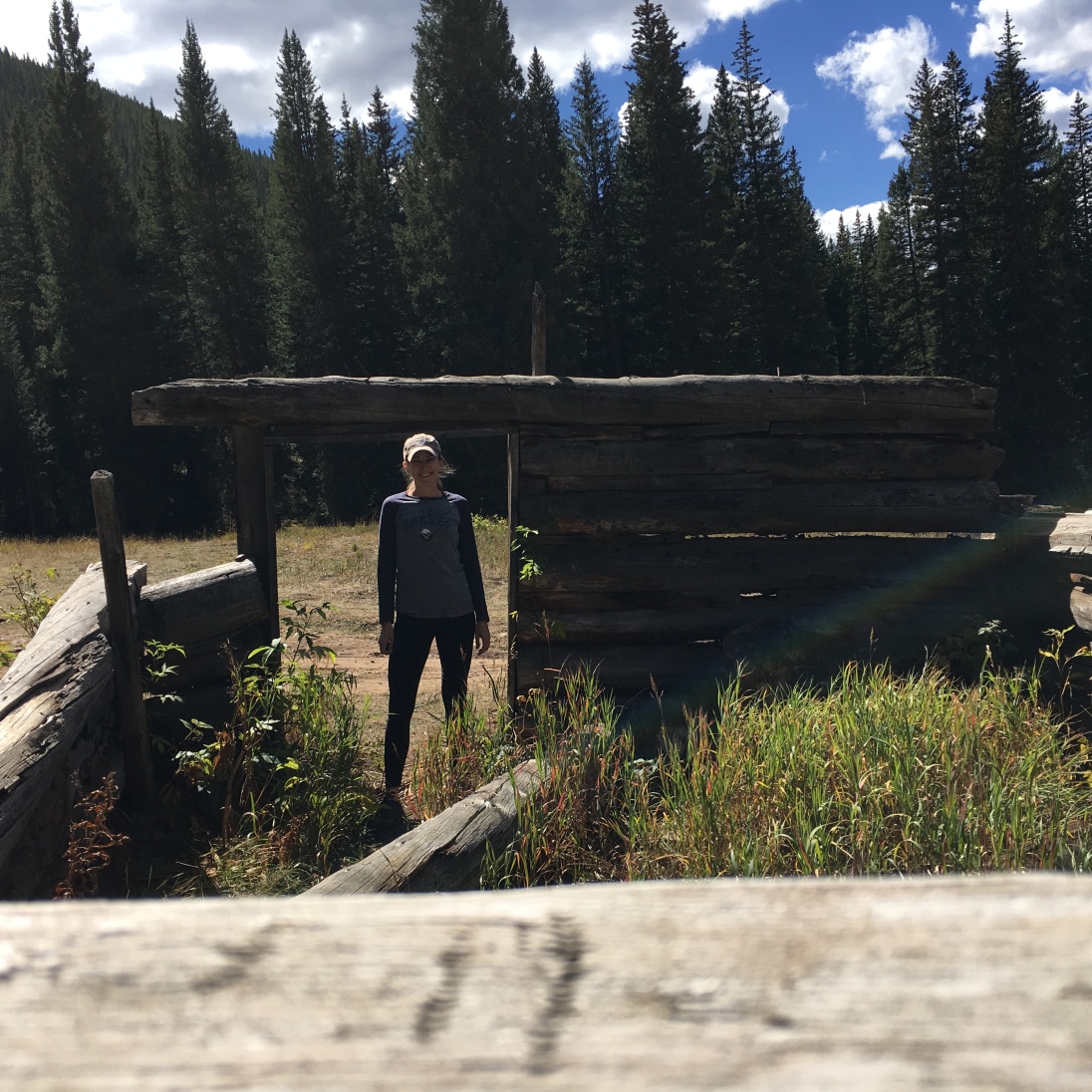 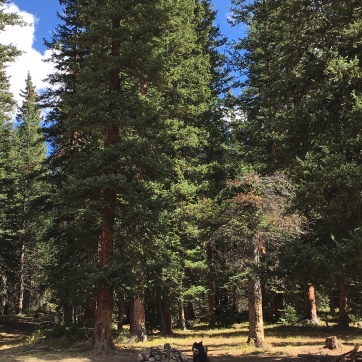 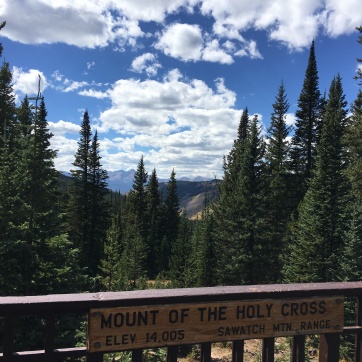 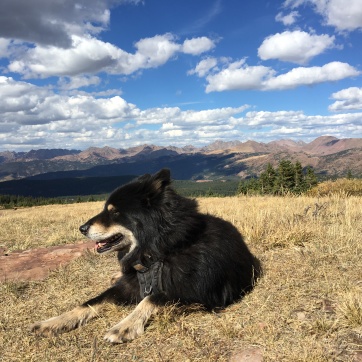 4 thoughts on “An Autumn Weekend in Central Colorado”