Skip to content
Jennifer A Swallow My Words, Your Words, Their Words, This is English, Thoughts on English, Writing October 7, 2018December 26, 2019 4 Minutes

My roommate my first year in Russia told me that English was an easy language to start speaking and make yourself decently understood but near impossible to master because of all the idioms, nuance, unexpected pronunciations, and multiple ways of saying everything. No matter how long you speak it, you’re always going to encounter something a native speaker says or writes that baffles you. Russian is the opposite. It has a dense grammar with lots of irregularities that tongue ties you for a long, long time after beginning, but once you’ve got it, you just fly into proficiency. Today, I thought I’d focus on a few of the intricacies of English grammar that I’ve come across recently that I think wouldn’t be so obvious to fluent, non-native speakers or to native speakers, for that matter.

The verb “do”. The most common usage of, and the biggest difficulty with, this word is forming the past tense. It is used for questions (Did you go?) and negatives (I didn’t go.) but not affirmative simple past (I went.). Because of this inconsistency, you often hear English learners say something like “I didn’t went.”

But “do” is also used for emphatic contradiction. Here are some examples.

Notice in all these cases, there is a preceding statement that the sentence with the extra “do” is contradicting in some way.

What I see a lot on dating apps is that native speakers are using “do” in standalone sentence without any contradictory or opposing idea. This drives me batty. I read their sentences out loud, emphasizing the word “do” to see if I can understand why they used it. I can’t. Here are some examples.

Can anyone explain this to me? My grammar-minded brain can’t handle it and I have to swipe left whenever I see this.

Use of apostrophes. What is every professional writer’s most hated punctuation error? Misused apostrophes. They are everywhere! The basic usage of apostrophes is so simple that I will never understand why people mess them up. But for those of us deep in the world of English, the rules are even more intense. Check out this gem that I came across recently in the Chicago Manual of Style.

Mind blown. I won’t judge you for messing this one up.

Cats Like Us. I found this store in North Tonawanda when I was visiting my family in August. 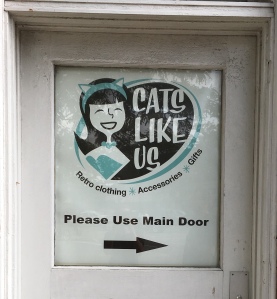 I said the name in my head over and over until I nearly went crazy because I couldn’t figure out which meaning they intended. Is it:

Native speakers who don’t make language their profession probably don’t see how this name can be interpreted two ways. But even writers sometimes fail at seeing titles or sentences from other points of view. Here’s another example from a writer. I was reading a story from one of my critique group members last week and came across this sentence: “He was more powerful than thought.” The word “thought” can be a past participle or an abstract noun.  So which is the meaning?

Hence the importance of a critique group.

Placement of adverbs. A few years ago the internet was abuzz with the secret adjective order all English speakers use without thinking about. It wasn’t new to me; I had explicitly taught it in my ESL classes in Russia back in 2004. But I enjoyed seeing non-grammar minded people freak out about how cool it was.

What hasn’t been a hot topic in pop culture yet is adverb order. Placement of an adverb in a sentence can change the meaning entirely. Take the word “only”.

The change in meaning there may be obvious to you, but what if we change the placement of “never” instead?

The difference here might feel a bit more subtle or even non-existent to someone who doesn’t make language their livelihood. But the first implies that the speaker wanted the day to come and is excited that it finally arrived. The second implies that speaker didn’t want the day to come and is disappointed or upset that it has. The distinction isn’t so subtle after all.

What about you? Are there any sticky grammar points you’ve come across lately?

9 thoughts on “Say What? Edition 8: When Native Speakers Sound Like They Aren’t”