I’m going to start this post by saying that I was blown away by all my tour guides’ English abilities. Seriously blown away. As tour guides, I expected their English to be good, but they all had vocabularies far beyond what I expected. They understood everything I and the other guests asked, they understood all the different accents and levels of English skill of my fellow travelers, and they could talk at length about any subject we threw at them. They spoke fluidly and easily and rarely struggled for the right words. And this from people, with only one exception, who had never spent time in an English speaking country.

There are, of course, far less fluent people, and hilarious examples of Chinglish (Chinese English) are all over the internet. These were some of my favorite signs. 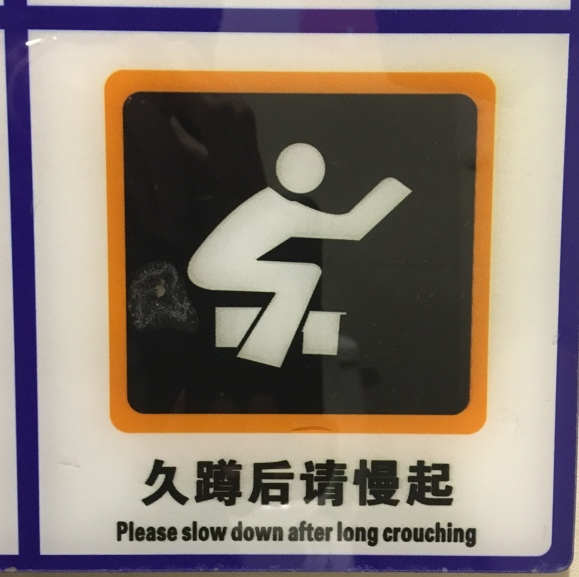 Warning about using the squat toilets 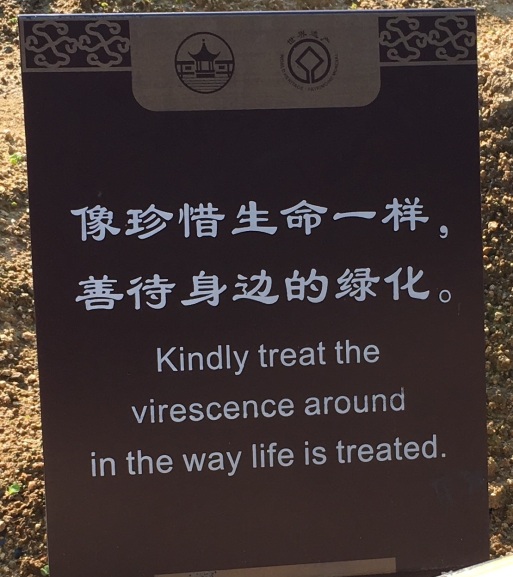 But I didn’t see as much weird signage as I expected to. A lot of it was surprisingly grammatically correct. It appears the government has a campaign to make it better. Grammatically correct and logical, however, aren’t the same thing. One Chinglish fad, if I can call it that, which I haven’t encountered on the internet, is that of having sayings emblazoned across winter coats. Almost everyone in China wears knee-length puffy coats in the winter, and many of these coats have sayings on their backs, for a reason I can’t explain. The ones I saw were written in proper English, and yet left me scratching my head about why someone would want to wear these sentences on their body all winter long. For example, in order of weirdness:

I have to believe the wearer of the last one has no idea what it means.

Now, enough about their English. What about my Chinese? I was quite grateful for English signage in the metros and elsewhere in the big cities, for English language screens on ATMs, and for the effort of everyone I met who didn’t work in the tourism industry to speak English to me. They all tried so hard and were so polite and unnecessarily apologetic (I am in their country after all) when they didn’t have the words. But I did learn some Mandarin before I left and enjoyed getting to try out the little I knew. You don’t have to venture far out of the tourist areas before all the English signage disappears. Knowing how to both speak and read some basics is most helpful.

Because Chinese has simplistic grammar without all the tenses, plurals, conjugations, and all the excess words we have in English, it’s surprisingly easy to learn to speak. I found that when I paid attention, I could pick up on lots of words I knew (though not full sentences) even though I only studied for two months. I could say more than I thought I would be able to as well. The problem I encountered was with the tones. I could not remember the tones to save my life. If I want to continue to learn Mandarin, which I think I do, I need to find a better approach for memorizing tones.

And the way the Chinese build new words from existing ones is lovely and sometimes sad or wistful or otherwise laden with emotional meaning. For example, “to break up,” as in to end a romantic relationship, translates literally to “to separate hands,” as in you don’t hold hands with the person anymore. How can you not want to cry when you learn that? There’s a practical side to this type of word building too in that you learn how to say more with fewer characters, and you can more easily learn new words because they aren’t arbitrary. They build on what you know.

You can also learn by listening to the way Chinese people speak English. In Chinese, one word can have many meanings, so the Chinese will add on to that original word to make the meaning clear. For example, “jia” (first tone) means both house and family. So to clarify, they might say “jia ren” to clarify when they mean “family” as in “family members.” In English, we can also choose to add “members” for clarity, but we don’t need to. But when my Chinese guides were speaking English, for example, they would say “family people” because that is the literal translation of “jia ren.” So, I felt was able to learn more about Chinese by listening to how my guides spoke English and I’m encouraged by how much ground I covered in a short time to keep learning more. It is the most widely spoken language in the world, after all.

3 thoughts on “On the Eleventh Day of China: Who Speaks Chinglish?”