Last year, I started really pushing the limits of what I can do physically. Between the Harvard/Columbia hike and the Devil On the Divide race, I began to understand what I was capable of, and, naturally, this year, wanted to push myself to do more. So I signed up for seven races between St. Patrick’s Day and Thanksgiving and kicked off my training schedule on February 29 on my favorite high-altitude running road. I was stoked. I’d even sketched out blog posts for each race, setting goals for myself, imagining what I’d be feeling like as each race came up on the calendar. And then, in a story that will ring true for every person on the planet, the cancellations rolled in, one after the next after the next.

At first, I stuck to my training plan. A friend and I cheerfully ran our own St. Patrick’s Day 10k, at 8,500+ feet, 3,000 feet higher than the official race was going to be. We celebrated after with beer, pretzels, and some decidedly un-Irish mochi.

But a big snow hit in mid-April, tipping Boulder over the edge into its snowiest winter on record. At that point, the country had been home-bound for a month and I had reached my breaking point. Even as an introvert, I couldn’t handle it. My gyms were shut down, I couldn’t run because of the snow, and my dog is now too old for really intense hikes. So why bother trying to stay fit? I gave up, decided not to run anymore, and went into a funk for the next two weeks.

Then, a friend that I’d been pseudo-quarantining with suggested we sign up for the We Belong Virtual Series from Human Potential Running. It was four weeks of instruction on how to run ultras, defined as any distance more than a marathon. There would be discussions on nutrition, gear, and training, as well as interviews with experienced runners and experts on the various topics. At the end, the participants had a choice to run a self-directed 50k or as far as they could in 12 hours.

I said sure because, well, what else was there to do? And because I am fascinated by ultra runners, especially women like Courtney Dauwalter. And because I really valued all the time I was spending with my friend and this was something cool for us to do together.

The course was excellent, entertaining, motivating, and we both learned a lot, but, really, it consisted of us hanging out at one of our condos and drinking beer. It didn’t register in my head until mid-month that we were actually supposed to do this crazy run at the end. In May, I ran only five times: 4.3 miles, 5.3 miles, 6.2 miles, 6.2 miles, and 2.7 miles. But then suddenly it was May 29th and we were making a plan to run this ridiculous distance, 31.07 miles for the metrically challenged. Secretly we were each hoping the other would back out. I’ve never run more than 13.5 miles and she’d never run more than 17. But friends don’t let friends quit. Friends push each other to better things. So we did it!

The first picture is us at the halfway point – 25 kilometers or 15.53 miles. We got up before dawn and banged those miles out before 8am. The second picture is at the end. Yes, we really did look that happy! Because we are beasts! And because the damn thing was over, and margs and tacos awaited.

Our total elapsed time was 9 hours and 7 minutes. We built in some breaks and we also headed up to the mountains to run after sunrise because it was too ridiculously hot in town. Unfortunately, we ran into construction snafus on our way up, so we were in the car between segments for almost an hour and a half. Then we ended up running in some 80 degree heat anyway. I felt amazing up until about mile 25, then not as great, and then those last few miles back down from the high elevation in full sun just about killed me. But again, margs and tacos! 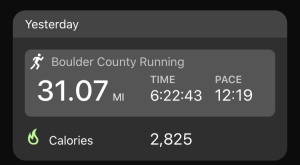 Running with a clear, specific goal yet without the pressure of a real race or competition allowed me to experiment and made me finally understand what I need to do to be capable of longer distances. We had food in the car and stopped to refuel our bodies. We mapped out segments and took breaks. The brutal sun forced us to walk sometimes. I ran slower than the pace my body normally wants to go. All of these elements were crucial to succeeding. And having the support and encouragement of a good friend doing the same crazy challenge too was the cherry on top. I never, ever would have done this alone.

So what’s next? Well, obviously we’re going to do a real 50k! We’re signed up for a race in August in the mountains…with 6,200 feet gain. We already know we can go the distance, so there’s no point signing up for a simple flat race. I told you I always have to push the limits!

2 thoughts on “Pushing the Limits”