Skip to content
Jennifer A Swallow Life in the People's Republic, Whatever Comes to Mind June 1, 2017December 26, 2019 4 Minutes

My recent 180 on Boulder has got me thinking about all the other things I’ve done in the last three months that I never thought I would. Being single gives me a lot more time to spend with the girls. In the core group I hang with, five of the six of us terminated our long term relationships between March 2016 and March 2017. And if you expand that core group to the friends of friends who join our outings on a semi-regular basis, 8 of those additional 12 women are single as well. Which means there are plenty of unencumbered ladies to get into trouble with on any given night. (As if anything any of us do can remotely be considered trouble-making. My penchant for cursing loudly when small children are present is probably the worst of it.) And since I’m not trying to balance relationships with friends with a relationship with a life partner anymore, I’m saying yes to more ridiculous things I would have passed on before. In no particular order, I present to you the following:

When we walked in the door for our 101 class, the advanced class was just finishing up. They looked like this. During my class, I looked like this. So, one class was enough for me, but, ever the sucker for making sure I get the most for my money, I had purchased a four pack of classes for $45 instead of paying $20 for a single class. What to do? I looked at the schedule for their other offerings and found Pound. Yes, it looks a little hokey from the videos, but it is SO much fun. You sweat a ton and work muscles you didn’t know you had, and the instructor, April Abbott, totally kicks ass. Someone find that woman a studio in Boulder!

Me? Pay $20 for what is essentially an hour long guided session of stretching and near-napping? Apparently so! The soothing voice of the instructor, the images projected on the planetarium (except the snowy ones – I closed my eyes during those), and the purposeful clearing of the mind were exactly what I needed on that particular morning. I’ve never felt more like a Boulder cliche than when I walked out of there and went to brunch in my yoga pants. Unlike a Boulderite, however, we did not join the hour long wait at The Buff, opting instead for immediate seating at the far less fashionable Le Peep. Let’s be real, eggs are eggs no matter where you eat them.

I made it almost nine years in the Denver area without visiting Black Hawk. It’s a gambling town, so what’s the point? Don’t get me wrong – I love Vegas. But Vegas has pools, shows, great food, beautiful state and national parks for hiking nearby, and ghost towns within a short drive. Black Hawk, on the other hand, was just a lot of sad looking people wasting money. Basically what I expected. Not as sad as Deadwood, but pretty close. But I did get $5.00 for signing up for free VIP card and a $20 dining credit for spending $10 on the slots, so with those perks and the free drinks, it was a cheap night out.

At one of the Dash & Dine races, Orange Theory had a tent set up and after talking to them, I decided to try it. I was instantly hooked! Yep, me, doing a fad workout (although less fad-y than Pound, I suppose), wearing a heart rate monitor and everything. The workouts are adjustable to any level of fitness, the atmosphere is motivational, and the coaches are supportive (unlike when I tried CrossFit for two months and found the owner condescending if you couldn’t finish the WoD or didn’t want to try something). Because they aren’t franchised, you can use your membership at any studio, but the one I go to most is a mile away from my house, so I run there and back just to get in a little extra ass-kicking. And then I swear violently (and silently) at myself in the mirror during class when I’m doing a treadmill block to push myself harder and harder. Is that weird?

Men on the Far Left of the Political Spectrum

I had some concern about being a Libertarian single in Boulder where the overwhelming majority of people are liberal, often to an irrational and kooky degree. Guess what? It’s turned out just fine so far. In fact, being a political minority turns out to be a great filter. I don’t want to associate with people who prefer to live in an echo chamber (no matter what their views) and who can’t handle people with different opinions. I want to spend time with people who can discuss issues calmly, who are open to other points of view, and who can agree to disagree on some points with no lingering rancor. Dating Democrats has restored my faith in humanity. In all cases so far, it turns out that when you are really willing to listen to each other, you have more in common than you might think.

Ghosts in My House

Remember in middle school when you and your girlfriends were in someone’s basement with a Ouija board, giggling and arguing about who was pushing the planchette? It was just like that. I have a reoccurring dream in which a young, blonde man comes into my house through the back door on Friday afternoon to “take care of things.” Same guy, always on Fridays. Never mind that no one can actually come in the back door since there is no knob or key hole on the outside. So, I told my friends, several of whom are already convinced my house is haunted, and we decided to try to talk to the ghosts. Supposedly we made contact with a woman who was born in Boulder in ’42, died here when she was 46, lived in this house for 8 years, had children, and said we should know her because of YCV, whatever that means. Young Citizen Volunteers? Cartierville Airport?She refused to answer many of our other questions. Was someone pushing the planchette? Probably. But even if not, I still sleep soundly in the house either way.

Feast your eyes upon this glorious beast. This is what you get when you rent a fully furnished historical building, although this monstrosity was probably made not that long ago. Jealous? 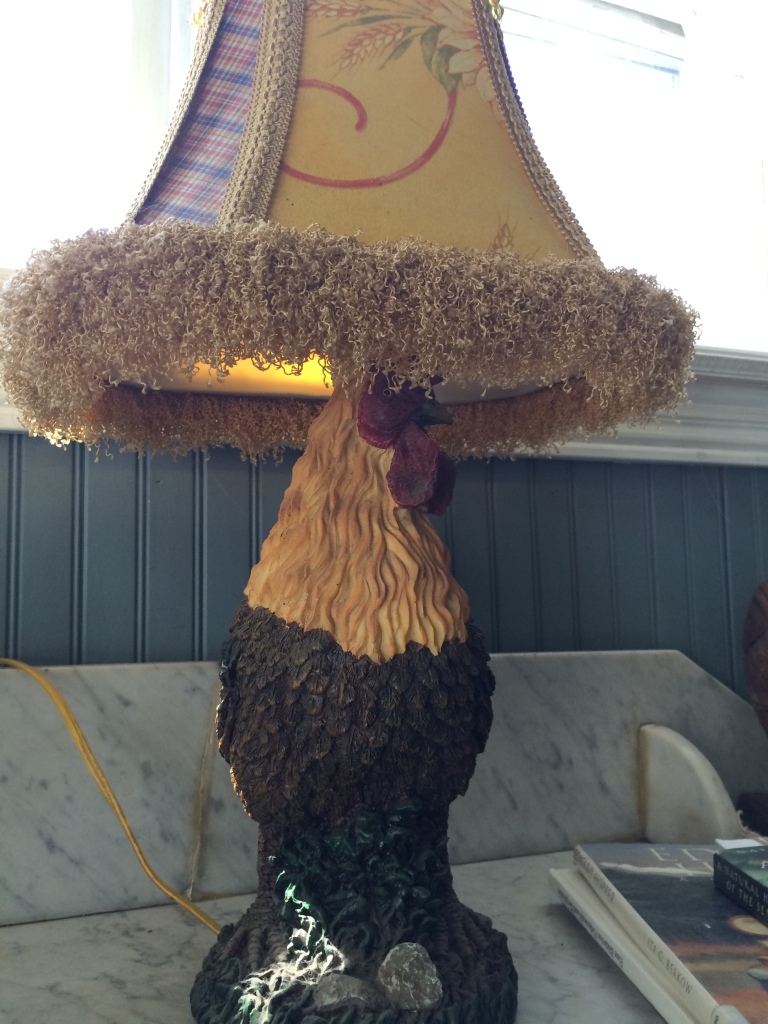