Earlier this year, I ran a mountain relay race and it did something to my brain. It made me want to up my running game. I mean, distance? Yeah that’s kind of cool. Maybe someday I’ll run a marathon. But running uphill at 12,000 or 13,000 feet where you’re struggling for oxygen and then being pulled down the other side by gravity so fast that your legs can’t keep up and you nearly trip over your own feet and tumble down a ravine? That’s where it’s at. And that’s how I ended up spending money on more ways to torture myself.

I signed up for two September races that both started at high altitude and involved a lot of elevation gain. And signing up for them meant I had to train for them. So I spent a lot of nights this summer running for miles and miles up Four Mile, Sugarloaf, Sunshine, Flagstaff, and the other mountain roads that rise up from Boulder valley into the foothills of the Rockies. It was hard to push myself to get out there. And it was scary being all alone, especially when someone pulled their car over on a particularly deserted stretch past Gold Hill and tried to talk to me. Or when I underestimated the time sunlight would fade from the canyon and I ended up running in the dark, surrounded by thick, bear and mountain lion infested forest.

But I did it and I got stronger and stronger, and I have to tell to you, when you’re running five miles of relentless uphill, when you reach that summit, your heart soars. It’s such a high. But did it pay off? Read on!

Devil on the Divide, September 7

This was my first race with elite runners. Only 139 people ran this 22k race (compared to over 3,000 for the Vacation Races half marathons I love doing with my friends) because you don’t sign up for this casually. You have to be serious about training or you’ll never make it.

The first four miles were straight up, with a 2,000 foot elevation gain, just like I had trained for. I did great, reaching the mile 4 aid station in 1 hour, 7 minutes. Then I stopped and tried to eat. Any time I’m doing something strenuous, I find it very difficult to force myself to eat, even though I know I need to. The drive to this race was an hour, so I ate a lot in the car on the way because I knew I’d need the energy and not be able to eat on the course. Predictably, in the two minutes I spent at the aid station, I only managed to choke down a single peanut butter filled pretzel bite, so I decided to just keep moving. I grabbed a piece of bacon, bit off a third, and continued the uphill climb. That stupid piece of bacon sat in my cheek for a quarter mile getting mushy and nasty before I gave up on my esophagus and spit it out.

I kept a good pace on the remaining 2.5 miles of single track to the summit, forcing myself to keep up as long as possible with the dudes in front of me whose legs were several inches longer. I’m quite proud of myself for only having one uphill mile slightly over 20 minutes, though, let’s be honest, I wish it were none. But, for perspective, when I hike 14ers with my friends, we take around 45 minutes per mile at this elevation, and we are faster than average hikers. And I managed this race pace despite some strong wind and cold. This was the only race I’ve ever fully run in long sleeves, and lots of people were worried about the dark clouds overhead. You really don’t want to be above treeline if there’s any chance of lightning.

I almost wiped out as soon as I left the summit because the downhill was so steep and winding, but by some miracle, I kept my feet beneath me. Others were not as lucky. I saw more than a few bloody shins at the finish line. The next few miles were rolling ups and downs, and per usual, I really sucked at taking advantage of the downs. I can’t make my feet move fast enough, and I ended up getting passed a lot. Or, more accurately, letting people pass. We were still on single track for several miles coming down from the summit, and since I wasn’t going to win anything anyway, I stopped from time to time to let people pass when I heard them coming up behind me.

About 10 miles in, I started to fatigue big time. On small uphills that I could have easily run at the beginning, I had to walk. I thought about trying to eat some of the sports beans I had in my bag, but I knew that was pointless. There was a particularly brutal uphill on mile 11 that everyone walked. It was an out-and-back to a check in point. There were several mandatory check in points on this race and strict cut off times because of safety concerns. Fellow runners were also really good about checking up on each other. The few times I had to fully stop and catch my breath for a few seconds, someone going by always asked if I was okay. But that mile 11 was so bad that even after I got my bib marked by the race official and turned around to go downhill, I could barely run.

The rest of the miles, though almost completely downhill, were abysmal. Partly my problem was pure exhaustion and massive pain in my hamstrings, and partly it was that we were back in the forest and there was still a ton of snow melt that made the trail muddy and slick. The unavoidable tree roots popping up everywhere were especially slick and I fell once, but I was moving so slowly I didn’t get hurt. At 12.25 miles in, I was done. I kept slowing to a walk and then talking myself into a jog again, reminding myself that if I jogged, I’d be done faster. I was literally talking to myself out loud, encouraging and goading.

Then, when my GPS hit 13 miles and I could hear the cars rushing by on I-70, my proximity to the finish line hit home. I was going to do it. I was really going to do it…and I was SO close to my goal time. I knew I wouldn’t make my goal—I did not have an extra ounce of energy to give—but I was really going to finish this thing and finish it well. I had to fight back tears of pain, elation, incredulity, frustration, relief, and every massive overwhelming emotion brought on by my ability to participate in an event like this.

And then it was done. I was in the Herman Gulch parking lot, someone was handing me an awesome camping mug as a finisher’s prize, and someone was bending down to take the timing chip off my ankle because I was delirious and couldn’t do it myself. I was in bad shape, quite honestly. They served us a delicious lunch of loaded baked potatoes and green chili (and unlimited Tommyknocker). I was shivering so badly from exhaustion in the lunch line—even though it was 70 and partly sunny—that they hustled me in front of the line to get some green chili immediately.

My post race self-analysis is that while I trained, I didn’t train enough at really high altitude. I trained mostly in the 7,000 – 9,000 foot range because, with a full time job and a dog, I just didn’t have the time to drive to really high altitude areas for practice runs. But then come race day, I pushed myself to the absolute max, as I knew I would. It’s just how I am. I had a goal and I was going to reach it, or at least come really damn close. Just imagine what kind of time I could have if I did train at real altitude…and learned how to refuel my body on the course! 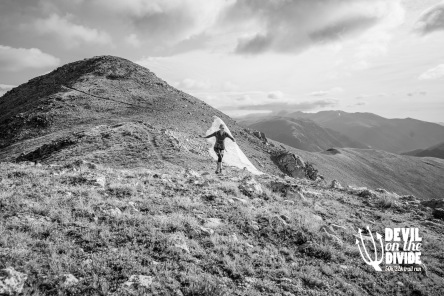 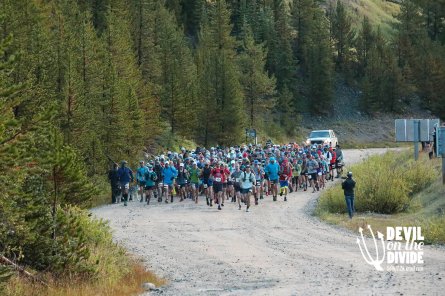 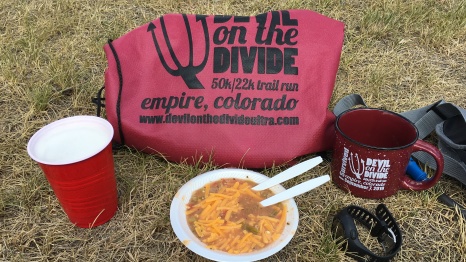 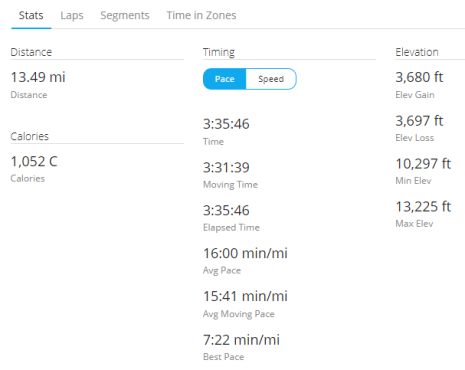 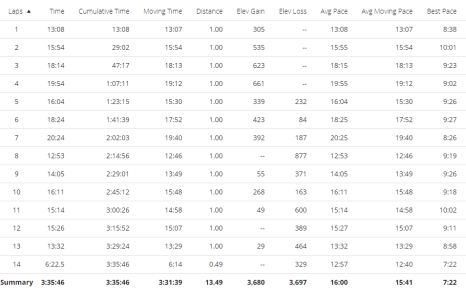 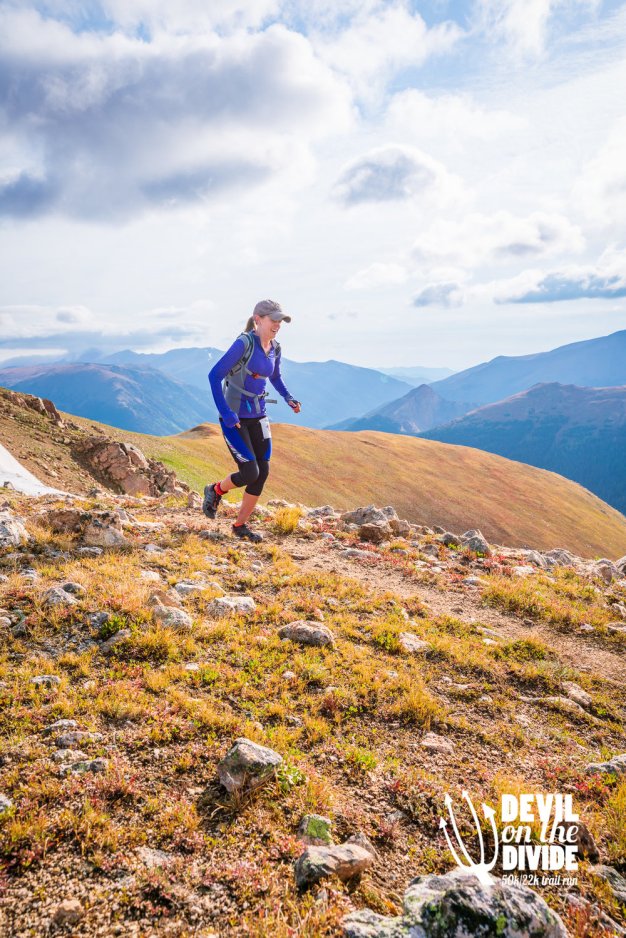 I signed up for this race partly as a way to redeem myself in case I totally bombed at Devil on the Divide. And I signed up because of peer pressure. All my runner friends were doing it on the final day of our weeklong vacation in Durango, so I really had no choice.

I based my goal time on the fact that even though this race was only one mile shorter than Devil on the Divide, there was a lot of altitude difference.

Finishing 50 minutes faster seemed reasonable. Turns out, even I underestimated the difference the effective oxygen level makes. I crushed my goal time by 21 minutes! Don’t get me wrong; this race was still really, really hard and I walked plenty on the uphills. But I had a really damn good race compared to the other!

I did eat dirt big time about 11.5 miles in. I knew it was going to happen. I had scuffed my feet a few times and kept telling myself to pick my feet up and be more conscious, but the scolding didn’t help because all of a sudden I was heading for the ground. I bumped my left shin on one rock and saw a rock closing in rapidly on my face, so I twisted my torso and managed to catch the rock with my left shoulder instead. The force of impact, combined with gravity pulling my down flipped my legs over my head in an awesome Bond-esque movement that, sadly, was not captured on video anywhere. I rolled and stood up, dropped a few f-bombs, shook myself off, took a few steps, dropped a few f-bombs, had to regroup again, and then got moving, slowly, then faster and faster, all the while dropping a few more f-bombs. The fall probably only cost me one minute, but it enabled five people to move ahead of me, which was disappointing.

Although I felt more of a sense of accomplishment of having done something truly spectacular and unique after Devil on the Divide, I enjoyed this race much more. That’s partly for the obvious reason that it was easier, but also because I did it with friends. One part of the course was an out-and-back, and on my way up, I saw one of the people in our group and on the way down, I saw another. It’s fun to see people you know while on the course, fun to get to cheer them on as they come through the finish line, and tons of fun to drink celebratory beers together after. 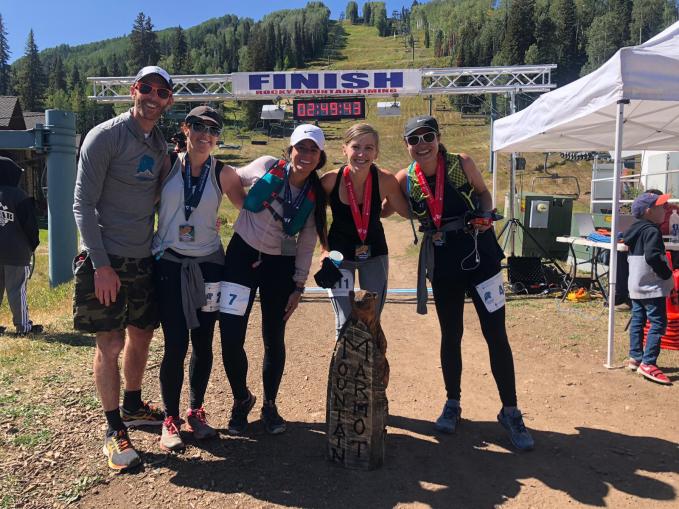 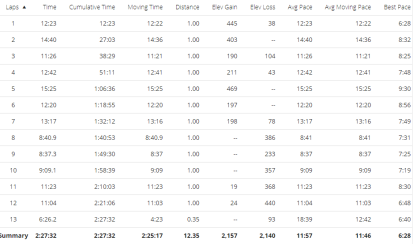 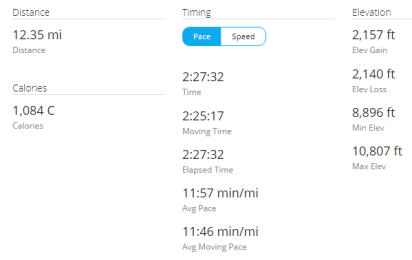 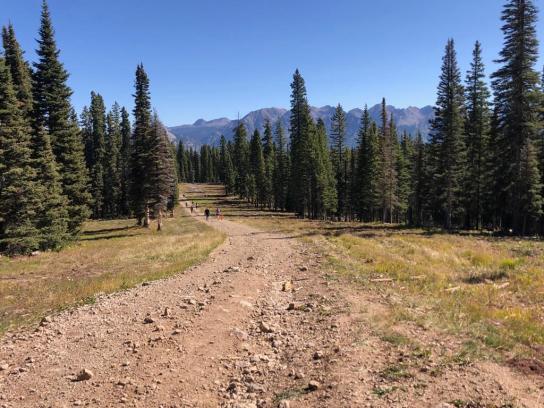 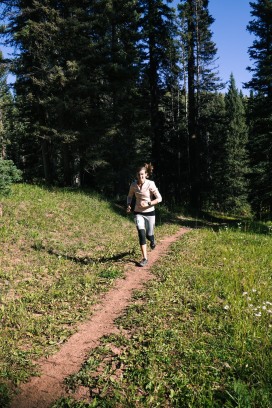 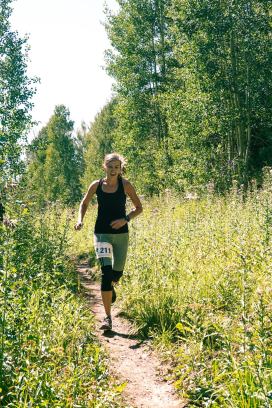 What now? Well, I don’t see Leadville or Barkley in my future. But Bryce Canyon 30k…maybe! I’m starting small. Despite my willingness to sign up for absurd races, for me, running is not life. I’m so over this running thing right now. I’m looking forward to a long break from running (except Tuesday night fun runs) and lots of time at Mecha and F45 strength training instead, until this insanity starts over again in six months.

6 thoughts on “What Fresh Hell Is This?”